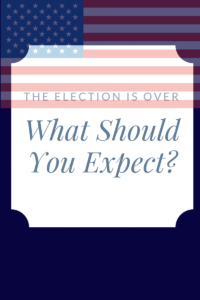 It has now been one month since election day, a new administration in the White House and a new Congressional makeup are in the works. If you’re like us, you are probably starting to wonder, “How will this affect me?” The President-elect made campaign promises that would affect both personal and business taxes as well as healthcare costs.

While campaign promises are subject to change, the following are the highlights of what you may expect following the inauguration of President-elect Trump based on his proposals:

President-elect Trump’s campaign included several tax-related proposals that he intends to pursue during his first 100 days in office, which are set forth in more detail below.

This rate structure tracks one proposed by House Republicans earlier this year.

In addition to changes to individual income tax rates, President-elect Trump proposed changes to the capital gains and dividend tax rates to align such rates within his proposed percent income tax bracket levels.

President-elect Trump further proposed he would seek to limit itemized deductions, eliminate the head-of-household filing status and all personal exemptions.

President-elect Trump made repeal of the Affordable Care Act (ACA) a primary focus in his campaign. The President-elect said he would call a special session of Congress to repeal the ACA, which enacted several new tax provisions and a penalty into law to fund the ACA, including the net investment income tax and the Additional Medicare Tax, both of which largely impact higher income taxpayers.

The current corporate tax rate is 35 percent. President-elect Trump called during the campaign for a reduction in the corporate tax rate from 35 percent to 15 percent. Furthermore, the President-elect has proposed sharing that rate with owners of “pass through” entities (i.e. sole proprietorships, partnerships and S corporations), but only for profits that are reinvested in the business.

Trump also proposed a doubling of the small business expensing election to $1 million, and the immediate deduction of all new investments in a business.

President-elect Trump’s tax proposals that are outlined above are based largely on representations by him during the campaign and in his campaign materials.